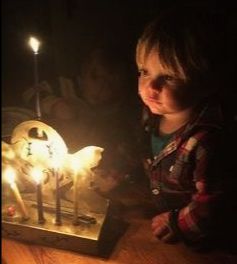 Returning, the flow of steam dances from clay thrown into vessel.
Containing. Earth. Heat. Water.
The morning’s altar: an uncluttered table with coffee and journal
Returned, I awaken!

( when life’s distractions muffle the niggun’s melody, perhaps I will seek the splashing sound of the salmons’s run )
Returning, she journeys through the seasons
Laying the seeds of the future at the place of her birth
Returned! To the land of her soul.